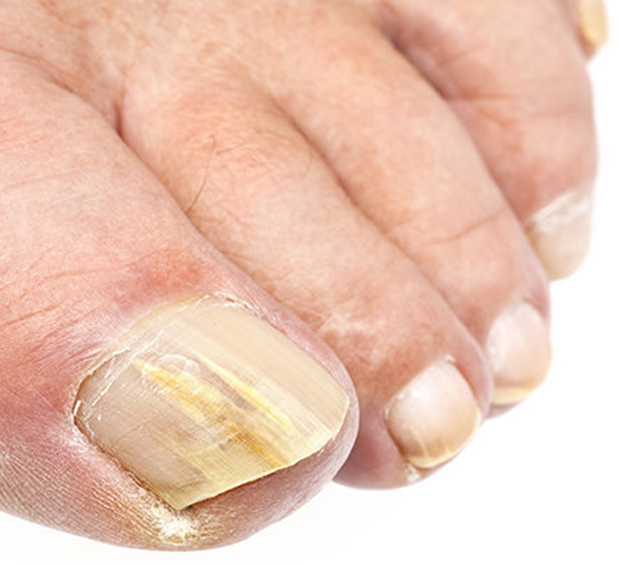 By the time people know they have Fungal Nail, their nail is often thickened, brittle or crumbly and yellow brownish in colour.  However, it often starts out as just a white or yellow spot under the edge of the nail.  Treating it at this point is much easier, but in the vast majority of cases people are unaware they have it, or think if they leave it, it will just go away. However, given the pathology of fungal infections they are likely to get progressively worse, until in some cases it can be present in all 10 toenails and all 10 fingernails (although having fungal infection in the fingernails is rarer than fungal toenails).

For many, fungal nails are just a cosmetic issue, but for some it can also become painful, due to the nails being thicker and out of shape. The fungal infection can also spread to the skin which is why many sufferers of a fungal nail infection also have athletes foot.  Athletes foot often presents itself as red dots on the skin (or it may indeed have begun in this way).

Having a fungal nail does not mean that someone has poor hygiene, and it can affect anyone. Fungal nail is exactly as the name suggests, an infection caused by a fungal spore. It is not a bacteria or viral infection. However, the prevalence of the condition increases with age.

Other factors that can increase your chance of developing nail fungus include:

Apart from the cosmetic appearance of a fungal nail and the pain it may cause there are also other reasons why you may decide to seek treatment or see a fungal nail specialist.  A severe case of fungal nail may not only be painful, but it may also cause permanent damage to your nails. If you have a suppressed immune system e.g., caused by diabetes or medication it may also lead to other serious infections in your body.  Diabetics often have reduced nerve supply and poor blood circulation in their feet. They are also at greater risk of developing cellulitis which is a bacterial skin infection. As a result, a minor injury to your feet e.g., a nail fungus infection, can lead to a more serious complication.

Instead of treating a nail fungus infection some people choose to try and cover it up instead using nail polish.  Whilst I understand the desire if you are self-conscious about the infection to cover it up, in the long term you may be making the situation worse.  The nail polish can trap in any moisture on the nail which then allows the fungi to thrive.

No Quick Fix to a Fungal Nail Infection

We always see an inundation of clients in spring and summer as their thoughts turn to getting their feet out and they decide that this is the year that they want to do something about their nails and not be embarrassed about them.  However, it is important to know that there is no quick fix to treat fungal nail, to eliminate fungal nail takes time.  The infection can’t simply be ‘sucked out of the nail’ e.g., laser treatment of the fungal nail can kill the infection, but the nail has to be given time to grow out before you see a cosmetically different nail.  This may take 6 months to a year, depending on how fast your nail grows.

If a fungal nail is resistant to all treatment, then it is possible to have the fungal nail removed.  However, this is a permanent solution.  It is intended that no new nail will grow through, so this option is for those who feel that they really don’t want to live with the condition anymore and have decided for a variety of reasons that medical treatment of the infection itself is either not suitable e.g., due to medical contraindications, or hasn’t worked.  For more information about nail removal please go to our nail removal/nail surgery page on our website.

Another option if a patient does not wish to treat the fungal nail, but still wants to improve the look of their nail’s when they are out on show, is to undergo a technique called Pediqe nail reconstruction.

← What are the Different Types of Feet and Foot Shapes