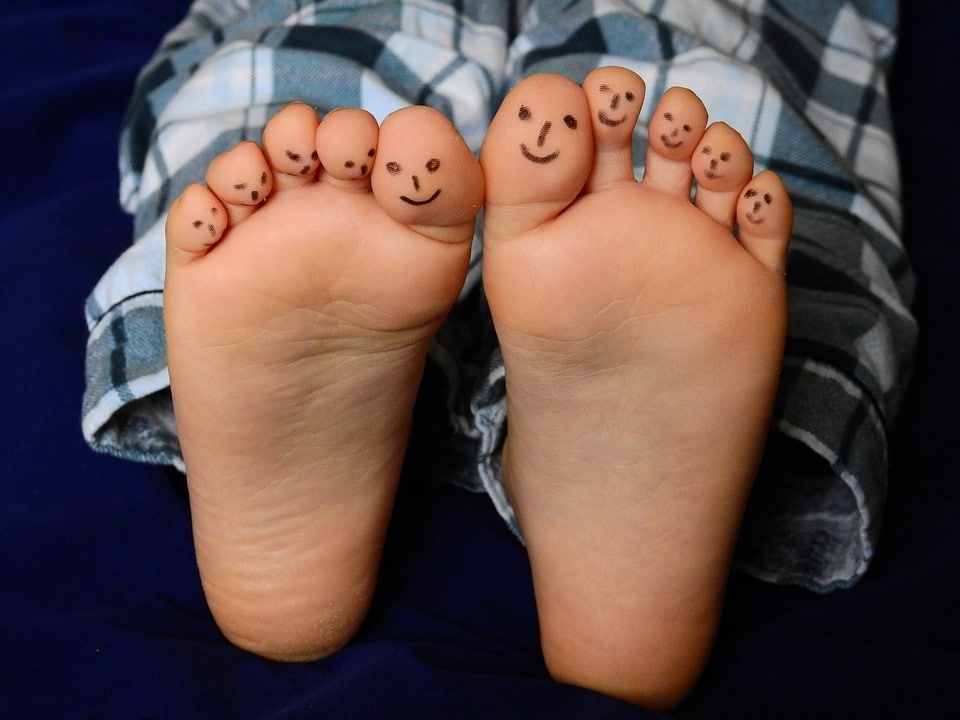 As much as half a pint of moisture is lost through the approximate 250,000 sweat glands found in the feet each day, which helps the body to keep cool, with the feet containing the highest concentration of sweat glands per square centimetre in the entire body.  If you suffer with excessively sweaty feet (a condition called hyperhidrosis) then changing your socks half way through the day is a good idea.  It’s also advisable to wear socks made from natural fibres, for example bamboo, rather than those with a high content of polyester.  You can also put antiperspirant on the bottom of your feet and allow to dry before putting socks on.

The largest feet in the world belong to Orlando Rodriguez Hernandez of Venezuela, and are recorded by Guinness world records at 1 Foot 3.79 Inches long on the right foot and 1 foot 3.59 inches on the left foot. At the opposite end of the spectrum the smallest non-bound feet belong to 19-year-old Jyoti Amge from Nagpar, India at just 3.72 inches long!

However, Orlando’s’ record will no doubt soon be broken as The College of Podiatry released a study in 2014 saying that the average foot size is getting bigger with the average shoe size in America having increased by a full two sizes over the previous 44 years.  The thinking behind this change is that they have adapted to our taller and heavier builds.

Your feet can also be bigger at the end of the day than the start, due to swelling.  For this reason shoe shopping is best done in the afternoon, according to the American Podiatric Medical Association.  When you try on shoes, you should also try them on both feet; as it’s entirely normal to have one foot larger than the other.

Women generally experience about four times as many foot-related issues as men. Often this is down to shoe choice, with many women choosing to wear heels.  This style of shoe though often puts extreme strain on to the arch and pressure on the toe box.  Over hte course of the day your feet on average absorb 26,000 pounds in total force, which is equivalent to 2 elephants! If you then wear a 2.5 inch heel this increases the load by 75%, which take the total load to about 45,000 pounds! (Interestingly it is thought that Male Persian warriors were the first to wear high heels).

It’s a question many parents want to know when it comes to buying their kids shoes!  Unfortunately there is no set rate.  They grow in fits and starts. The first 15 months sees the most rapid growth, increasing by about half a size every 8 weeks, then from 2 to 4 years things slow down a little bit with them, on average, being twice the size at age 4 as when the child was born.  Once they reach double digits in age growth rate will start to really slow.

When you are picking out your child’s shoes, ideally you want to allow 1 to 1.5cm space at the front and just a little bit of space on the sides (about 3 to 5mm) to allow adequate space for the foot to splay and not be cramped, and also allow room for growth.

By the age of 20 your feet will have done most of their growth, however they will change over the rest of your life in shape as well as size, as they become flatter and longer with age. Your feet may also grow slightly if you become pregnant. And in case you are wondering, it’s rare for both feet to be exactly the same size. One foot is usually larger than the other.

Morton’s neuroma is a condition caused by an inflamed nerve that causes pain in the ball of the foot. It is a painful sensation which affects the ball of the foot radiating into the third or fourth toe. It can feel as if you are standing on a pebble in your shoe or on a fold in your sock. Morton’s neuroma involves a thickening of the tissues around one of the nerves leading to your toes.

Who can it affect?

People who suffer from this condition have symptoms such as pain, burning sensations, nerve-like pain, sharp and electric pains in the ball of the foot radiating into the third and fourth toe. People may also experience stinging sensation or numbness in the affected toes. This pain can worsen with day-to-day activities such as walking, climbing stairs or hills and when doing sports recreational activities.

Why do you get a Morton’s Neuroma:

The top reasons are:

A specialist can diagnose a neuroma several ways:

Manual therapies are a highly effective option for the treatment of Morton’s neuroma – This can include manual therapies such as foot mobilisations and manipulations.

Mobilisations and manipulations are two non-invasive manual therapies that aim to reduce pain and restore movement into joints and surrounding tissues. They both work within the scale of your natural range of motion (RoM) available at the joints being treated.

Mobilisations use slow rhythmic movements and are performed within the passive range of motion of the joint. Its physiological effects stimulate receptors in the tissues and joint capsules. This sends feedback to the brain, effectively reminding the body of the motion which is available at that joint. Mobilisation is particularly useful as a treatment method in conditions such as Morton’s neuroma, injuries such as plantar fasciopathy and Achilles tendinopathy, during rehabilitation including high trauma, and ankle injuries.

Manipulation involves applying a specific amount of force in a very precise motion to a joint, to reduce joint restriction and restore normal range of motion. Manipulation has been shown to increase blood-flow to the affected area. Manipulation also immediately improves the mobility of the joints and reduces the pain experienced in the surrounding soft tissues. Some injuries result in adhesions and cross linkages forming around a joint limiting its movement. Manipulation can release the joint from these hindrances and return normal, smooth motion to the previously injured structure.

Manipulation has been shown to offer a better long-term result than a steroid injection.  As a non-invasive treatment it is therefore one of the best options for treatment of a Morton’s neuroma, and why we use this approach extensively in The Foot & Ankle Clinic in Darlington.

If you are suffering with foot pain caused by a neuroma or any other issue please go to our foot pain page on our website to see how we can help you https://thefootandankle.clinic/pain/foot-pain/